As we look to the end of our foaling and calving season, we now start our haying. It never ends around here!

Posted on June 2, 2020 by horseshoeangusranch

Happy Memorial Day! Toni went to grandpa’s grave and put more flowers on. Anna and Kaine caught the steers and heifers and fed and washed them. I worked on getting the videos uploaded. Dolly and Cammie had foals on Monday, Memorial Day foals. Ben worked on the continuous fence, and put the post in where Toni and I wanted to put in a gate, so we put the gate up that night. Kicker mowed more Russian Olive trees, he is making a big mark on them. Monday night we found out the champions of the Sasquatch Virtual Show, Foxy was the Overall Champion Heifer, we were all really excited. All three of the kids did excellent and were in the top Washington steers. 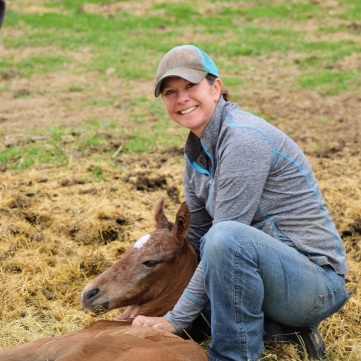 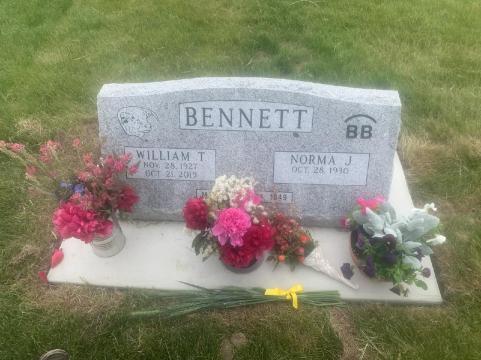 I did not sleep well Monday night, so Tuesday I was just exhausted. But, Toni is always tired, so she does not let you have a day of rest. We did a bunch of stuff, but I did not write it down right away so I don’t remember what we did that day.

Wednesday was much better, and it reminded me of the Lorrie Morgan song, “Except for Monday.” It was good that I felt much better because we were in meetings all day at work. It was a long day. Dad took Anna to the Jr High in the morning to turn in her library book and then his friends came and he and Anna showed them the horses. Toni had another day of school with the boys, and her work, which included some hearings on the phone. Toni and the three older kids went riding with Kathy late afternoon, so Jaxsen, mom and dad were the only ones there when I got there. So Jaxsen and I went out to start chores, but everyone was not far behind. The kids told Kathy she needed to come over every Wednesday afternoon, so Toni would have to take a break from work and take them riding. The horses definitely needed the riding. 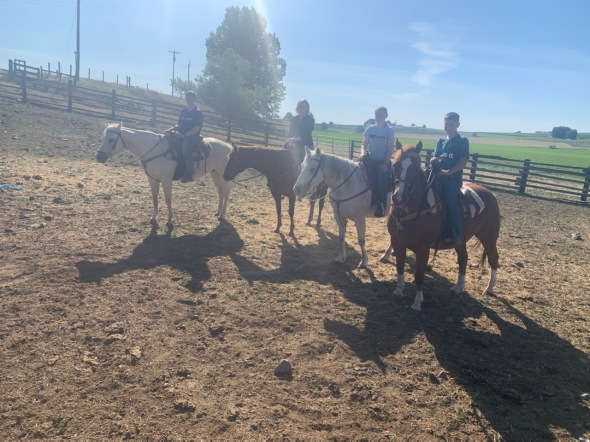 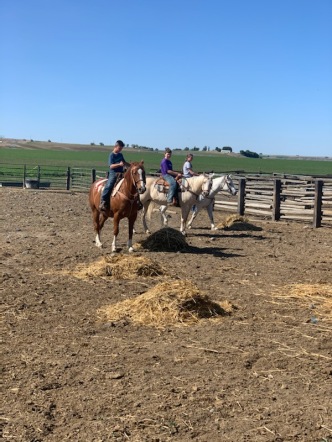 The weather is warming up. Toni took the kids over to grandma’s on Thursday and they spent the better part of the morning helping move heifers, Joe asked them to help for 10 mins and two hours later when Toni complained about how long it was taking Joe just told her she should have known it would not be 10 min. She texted us that, and mom and I agreed, she should have known. At one point Toni did confiscate Mar’s horse and rode a bit instead of walk, so that at least made her happy. BeeBee cut her leg up at Sonny and Jeanie’s so Jeanie brought her back on Thursday, straight from the vet office. They thought they should keep her up there to Dr her since it happened at their house, but we told them to go ahead and bring her back, we will add her to our Dring rounds. It is just that type of year. Jeanie brought a baby pig with her and Toni texted it was for the kids. 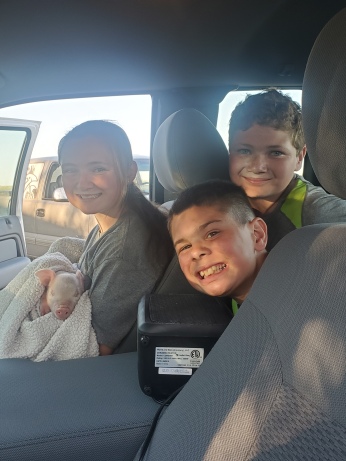 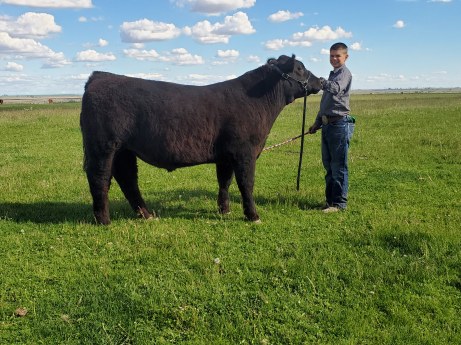 Toni had court, then brought us tacos from El Fat Cat, and they were GOOD. She was not happy though because she had to wait in line and was almost late for her 1 pm phone call. 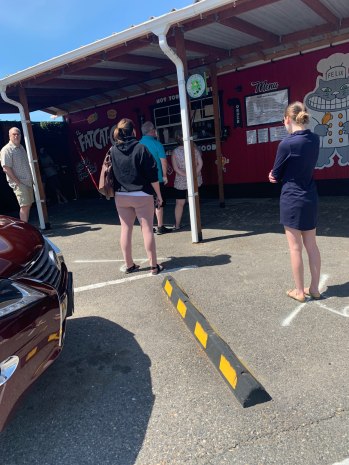 Jaxsen stayed with Toni after lunch and Traci and Whitney brought Natalie, Savannah and Kayla over in the late afternoon to see the baby pig, the horse named after Savannah, “Mean Jean,” and everything else. They left around chore time, after cookies with Auntie Pam. 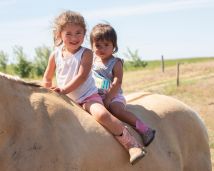 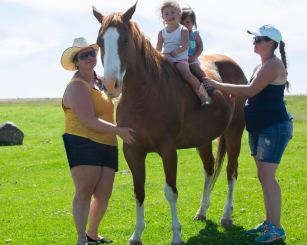 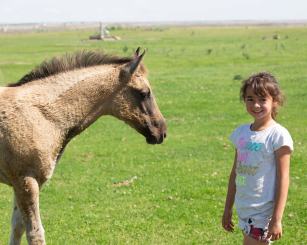 And then Chad texted he was almost at mom and dads to trim the yearling colts. We got them all done, and Hottie. The kids did chores and then we headed to my house to feed the steers and doctor BeeBee. 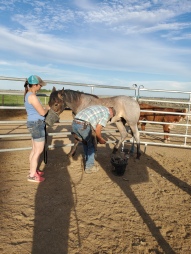 Saturday we had lots of people out looking at horses. Which means we got lots of pictures. There was a storm early Saturday morning, so first thing we ran around and made sure everyone was ok. First thing we had an outside mare come in to be bred to Dude. While we were visiting with that family, a neighbor showed up to look at the foals.

Then we had our afternoon family come and Toni took them around. After showing everyone around we took Dolly and an outside black mare and put them in with Sagebug, We brought Fancy, Twiggy and Abs back down to the house and took another outside mare to put with Dude. Then we doctored BeeBee and the kids fed their steers. About that time the storm really hit hard. We had heard we were going to get hail, so we were scrambling to get the vehicles under cover and as many of the animals protected as we could. During lightning storms, there just isn’t much we can do except pray. Our thoughts go out to the Alexanders who lost cattle during the storm due to a lightning strike. 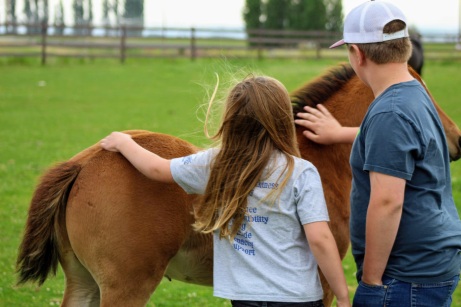 Sunday was stormy again, Anna, Kaine and I ran around in the morning and made sure that everyone was ok. We had another guest out on Sunday, so Toni and Kade showed him around. Mike is a repeat visitor that got his wish and was able to purchase a Gunner foal. 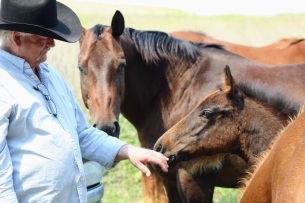 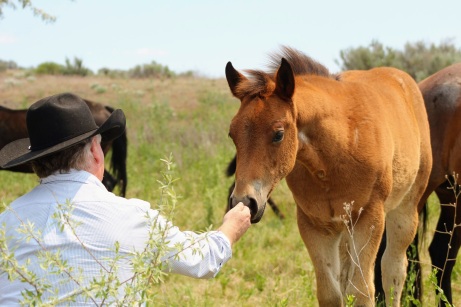 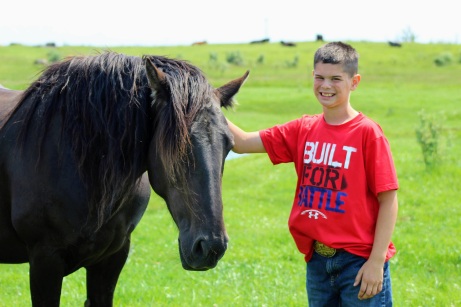 After lunch Anna clipped her steer and most of her heifer, I worked on pictures and updating the website. When Toni and Kade got done they called and we went down and did chores early. But by the time we got chores done, all the doctoring, pulled out some t-posts where Ben built a new fence, pulled a pole out of the burn pile, checked every horse on the place, we made it home at normal time, so not early! 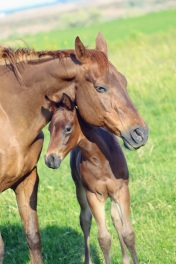 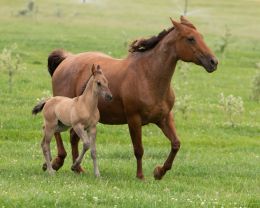 Next week begins the last official week of school for the kids and the official start of summer! We are really excited to begin summer and Toni is really excited to put her teacher’s uniform away and just go back to being a rancher and attorney. Over the weekend we got our first stack of 2020 hay and are looking forward to having some hay for sale this year. As we look to the end of our foaling and calving season, we now start our haying. It never ends around here!