KT Colonel witha Gun, “Louie,” is a remarkable, amazing colt by KR Gun Powder and out of Wright on Sugarnic, “Stinger,” KR Gun Powder is by Colonels Smoking Gun and out of A Bueno Poco Dunit. KR Gun Powder is the 2016 APHA Senior Reining World Champion. In only 9 shows, Gun Powder has been titled as the 2016 APHA Senior Reining World Champion and has amassed nearly $13,000 in NRHA earnings. Stinger won the Pro division of the Cascade Cutters Futurity and is a daughter of Lenas Wright On. Her dam, Just Plain Sugari has NCHA earnings of $111.31 and is an AQHA point earner. She is a granddaughter of Smart Little Lena, Slide Me Again and Just Plain Colonel, who are all money and pt earners. She is also the dam of our Stallion, Just Plain Starlight and of our brindle filly, KT Gun in a Million. He was born 5/8/18. $5,500

2002 AQHA Play With My Freckle, “Maggie,” is a daughter of Playper a son of Freckles Playboy and earner in NRHA, ROM, competed and placed in the world show, and had 83 reining points and 2 points in cowhorse. Playper’s sire needs no introduction, but his dam, Doc Bar Linda, was a cool horse in her own right becoming an AQHA Performance Champion, Superior Halter, Superior Showmanship, Superior Hunter under Saddle, placing at the wold how in multiple divisions, and a ROM. Maggie’s dam, Especial Freckle was shown reining, and goes back to Special Cutter who had NCHA earnings and was a son of Cutter Bill. Maggie also has Doc Bar on her papers along with Colonel Freckles, Freckles Playboy, and Betty’s Mount. This is a really well bred mare. Very friendly and kind. This is a more moderately built horse the has stayed true to her breeding. Maggie is currently being exposed to KT Jackpot City for a 2021 foal. $2500 http://www.allbreedpedigree.com/play+with+my+freckle 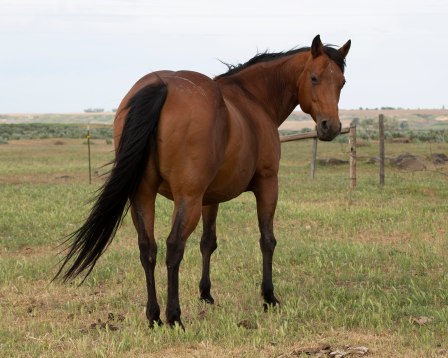 Chex In Diamonds, who we call Cupcake, is a 2012 mare by Isle Be Tucker Chex, another horse that came from a performance background. Cupcake was used as a heal horse before we got her. She is a dynamic package, not alot of size, but alot of go. On the ground this mare is in your pocket. She loves attention. Cupcake is another combination of performance, foundation, and speed. King Fritz, Jet Dial, Dolls Union Jac, and Doc Tom Tucker highlight her pedigree. Cupcake is currently being exposed to KT Jackpot City for a 2021 foal. $2500 https://www.allbreedpedigree.com/chex+in+diamonds

KT Sheza Ginger is a 2014 AQHA registered sorrel mare by KT Heza Pana Dude out of KT One For the Money. She stands 14.3 hands and has a sweet disposition with great ground manners. She handles easy, trailers, ties, stands for the farrier, easy to catch, and wants to be in your pocket. She was started as a 3 year old and currently has 9 months of recent professional training with Brandis Langston at Sugarland Horse Park in Woodland, CA. She is currently still with Brandis being rode daily and available for visiting. Ginger is fast paced, quick moving, and soft in the mouth, not ideal for a kid’s horse. She is currently turning back cows daily while in training which she enjoys. She is a great barrel, gaming, ranch sorting, or team penning prospect for the right teen or adult. She is at a point in her development where she is ready to go any direction. Her breeding includes Major Bonanza, Shipper W, Pana Dude, Royal King and more. $5,500 Located in N. CA. Call Nikki at 509-380-1914 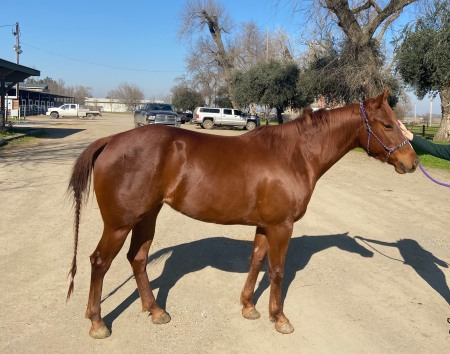 KT Desert Princess is out of mom’s favorite mare KT Copper Doc Lona, Lona, and is by KT Heza Pana Dude. Lona is a mare that we have raised, she is a third second generation raised here, she is out of Docs Sizzle Bar and Copper War Chic, “Chicken.”. Chicken was a great cow horse and show horse that we had for many years, she also a mare that we raised. We broke Lona to ride and have used her as a broodmare. Lona’s grandsire was Willie War Chic, ROM Race ~ SI 95. Dude is a great stallion that we kept out of Zinks Major Kid. He has some unique white markings, and is a very pretty golden color. Great bone, big hip, pretty head and a winning disposition. Dude was started by Jordan Crabtree in Ferndale, WA and he was a great horse to start, Jordan enjoyed riding Dude. This filly’s breeding includes Pana Dude, Major Bonanza, Willie War Chich, Sizzlin Hot, Docs Dee Bar, Ed Echols and more. Her pedigree is built for performance and she is going to have a lot of go and try. She was born 4/21/16. She is currently at the trainer and is being started. $5,000 Located in Arlington, contact John at 425-244-0390.

Looking for a fancy broke palomino mare? Look no further, KT High Wind, “Pena,” is a handy cow horse. She curls her neck so you can open gates in corners, great help sorting and moving cattle. She has been used as a turn back horse, ridden by adults and kids. She is by City Smarts and out of Frankly Rosey, “Rosie.” City Smarts has a pedigree that speaks for itself and he shows the best characteristics of this breeding. City Smarts loved to chase cattle and could really turn them down the fence. City was by An Educated Guess, the highest earning son of Smart Chic Olena. An Educated Guess has 385 reining points, over $20,000 LTE, Highest AQHA Reining Point Earning, Sixth on the list of ALL TIME LEADING AQHA REINING POINT EARNERS, AQHA World Show: 1999 – 4th Senior Reining, 2000 – 11th Amateur Reining, 2002 – 9th Senior Reining and multiple AQHA & NRHA Circuit Champion. City Smarts was a fantastic stallion, with a great temperament. He was really easy to be around and was very agile. He broke his leg as a baby, or he would have made quite the name for himself in the show ring. However, he rebroke his broken leg as a ten year old and we had to put him down. However, his legacy still lives on at KT Ranch and around the area in his foals. Frankly Rosey, “Rosie,” is a 2005 grey mare by Frankly Majestic and out of A Tuff Edition. A Tuff Edition is a Tuff Continental and Mr Breeze Bar bred mare. Frankly Majestic is a Okie Leo grandson. Rosey is a really sweet mare that everyone loves. She is claimed by 5 year old Scarlett. She was born palomino so she has the crème gene as well as a grey. With Rosey’s coloring genetics she has had some very colorful foals. Her foals are normally very sweet like her and easy to trai. Pena is $5,500 and is located in Wilbur, WA. Call Rusanne for more information. 509-641-0566

“Whim” is our 2017 Azteca gelding. As of 11/12/19 he is 15.2 hands tall. He is a swanky, impressive, elegant colt is out of Reeds Poco Ms Whinny and by Denali AK. Denali AK is a 2008 PRE STALLION, Elegant mover, tall, will be a winner of movements and morphology. He was the 2010 IALHA National Championship. First place (class of 10) NC Andalusian Colts & Under. First Place (class of 7) NC Spanish Colts 2 & Under. His sire Kianto Ami purchased as a foal in 1998 from Pam Hecht of JDON East in Florida. He has turned out to be a great sire of many National champion offspring, giving great power in movement as well as good bone size. His temperament is extraordinary, a calm individual. Reeds Poco Ms Whinny is a dun mare by Reeds Zan Kid out of Reeds Star Magic. Bred by Reed’s Quarter Horses of Rosalia, WA. This mare is 93% NFQHA and goes back to Dustin Command, Zan Parr Bar, Fritz Command, Star Duster, Skippa String, and Page Lee. Whinny is a very pretty mare that is a great combination with many of our stallions. Being 93% NFQHA, bred to any of our stallions she will have NFQHA eligible foals. Whinny has a very strong dun stripe and has not been color tested but has had 11 dun foals, 7 of which were registered as grullos. He was born 4/13/17 and is owned in partnership with Jackass Mountain Ranch. For more information on purchasing one of our Azteca foals contact KT Ranch at 509-539-9588 or 509-234-5881, or contact Ami MacHugh at Jackass Mountain Ranch at (509) 266-4226, ami@jackassmtranch.com For pictures of the parent’s go to our Azteca page. $8,000, his price will increase as his training continues. He is currently in training at Jackass Mountain Ranch.

BB Warriors Dolly is a 2002 red roan mare by Pepper Lightning, he goes back to Doc Bar, Light Bar and more. On the bottom side she is a granddaughter of Model Te En Ten, a ROM Halter and Superior Halter horse. She has Azure Te, Mr Blackburn 40 and Impressive on her bottom side. This is a nice looking red roan mare with great ranching bloodlines. Dolly was broke in 2015 and used on a feedlot and has had some light ranch riding, she has not been ridden since 2015. The pictures of her being ridden are from 2015. Dolly is being sold as broodmare sound, she is not sound for riding. $2,500 Dolly is bred to KT Gunners Sage Bug for 2020.