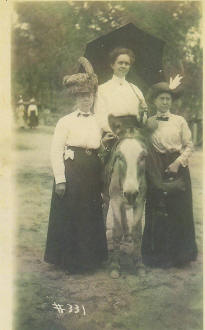 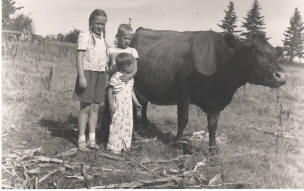 Pierson kids (Don is the little one) with one of their cows. 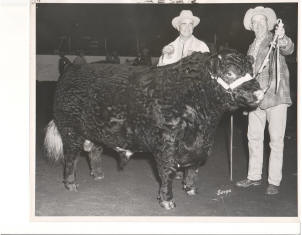 Great Grandpa Bennett at the Pacific International Stockshow at Portland with Hillsdale Caesar, a polled shorthorn bull that was Grand Champion bull in 1962. This bull was never defeated as a yearling or a two year old while being shown.

Pamela K. Bennett and Donald R. Pierson married in September of 1973 binding together a long history of ranching and agriculture and began what is known today as KT Ranch.

Don began life to a wheat farmer/rancher and a school teacher in the great Palouse area. Don’s dad was one of the youngest boys of 14 children, and Don grew up with his father and mother leasing ground in the Palouse until they were able to take over the Pierson family wheat ranch in St. John, WA. Don grew up on horse back, riding anything his dad bought, horses off the reservation that had never seen a human or whatever he could find a “deal” on. The Piersons ran about 50 head of commercial cows and had fields of wheat as far as the eye could see. Don grew up with Ed Hayes Sr, a horse wheeler and dealer, down road, and would go down and ride whatever horses Ed had in. Ed could sell anything and everything. Ed Hayes Jr. taught Don to be a cowboy and Don learned how to ride, rope, bulldog, and work all day and half the night. He took to horses and after going to college for a few years, and then playing minor league baseball for a few more, went to the rodeos. Don traveled the local rodeos, which were everywhere at the time, riding, roping, and bulldoging, and would work during the week for Ed Hayes Jr. During that time, Ed Hayes Jr had approximately 150 head of horses and 400 head of commercial pairs. Don continued to rodeo for five or six years then decided to pursue horses full time. Don went to work for the VA Quarterhorse ranch, home of Old Tom Cat and Ricky Taylor to learn about the business of breeding horses. 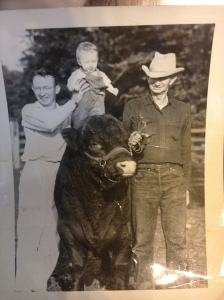 Pam began life to William Bennett Sr. and Norma J Bennett, ranchers through and through. Bill Bennett began ranching with his father, John William Bennett. The Bennetts immigrated from Sweden and began farming with a few cattle. John William traded 12 broke mules for 6 registered polled Shorthorn cows with calves in approximately 1925 beginning the Bennett’s registered herd. At the time, he was thought to be a fool, but John William became the largest polled Shorthorn breeder in the world. Bill and Norma Bennett wanted to continue the registered herd, but also wanted to prove they could do it on their own. With four kids, Bill and Norma lived hand to mouth trying to get a good herd of cattle together. Bill worked as the herdsman at WSU, ran ranches from Washington to Nevada, and then got a call that changed his life. Herald Thompson of Connell, WA had a heart attack at age forty and needed a partner to help keep his registered Hereford herd going. Bill and Norma packed up the kids and headed to Connell to pursue the registered dream and became the largest Hereford breeders around. Harald ended up selling the place to Bill and Norma and Bill ran with it. In approximately 1963 Bill took over the cattle, Norma raised the kids, and the kids went to school and worked before and after. Free labor in Bill’s mind was the best type. In 1967 with Pam’s dream of turning 16, Bill and Norma gave Pam her first AQHA mare, Copper Sheiba, the mare that started the KT Ranch horse herd.

Copper Sheiba was a mountain horse that had been run wild until 2, roped and cowboy broke. Bill traded a cow for her and gave her to Pam. The mare was smart and would get a cow in if a person could stay on her back. Never friendly, Copper Sheiba loved to chase cows, and a partnership between horse and rider soon developed. In 1973 Pam and Don married and Don saw a great opportunity to breed and raise registered cow horses. Don and Pam joined Pam’s family in ranching in Connell until 1995 when the ranch split up. Pam and Don at this point had bred Copper Sheiba to some fantastic local stallions, Willie War Chic, Guy’s Orbit, and had owned Reed King Duster, raising great foals with Sheiba.

In 1995 when Pam and Don split from the family, they were able to keep 25 head of registered cattle and their horses. With their two girls, Toni and Kellie, they started KT Ranch. The first decision was to get a stallion and breed some of the Sheiba daughters that had age and experience by this time. Kellie and Toni and had been showing the horses at every local event that they could convince their dad to haul them to from barrel racing, reining, pole pending, halter shows, trail shows, anything and everything. Don called a friend, who knew a guy, who called Rex Quintana who brought Docs Sizzle Bar to KT Ranch. “Siz” was an aged stallion by this time, bright red, skinny, and not a friendly horse. KT Ranch was lucky to get the breeding that Siz offered, but it took a few years to gain the horse’s trust. KT Ranch continued to raise registered Braford cattle and eventually expanded to add some Herefords back in, as well as some Angus.

KT Ranch continues to thrive with the balance of horses and cattle. Over 100 head of cattle and approximately 70 head of AQHA horses, with an emphasis on foundation breeding, KT Ranch now has another generation of young showmen and one showwoman to keep the dream alive in the great Columbia Basin. 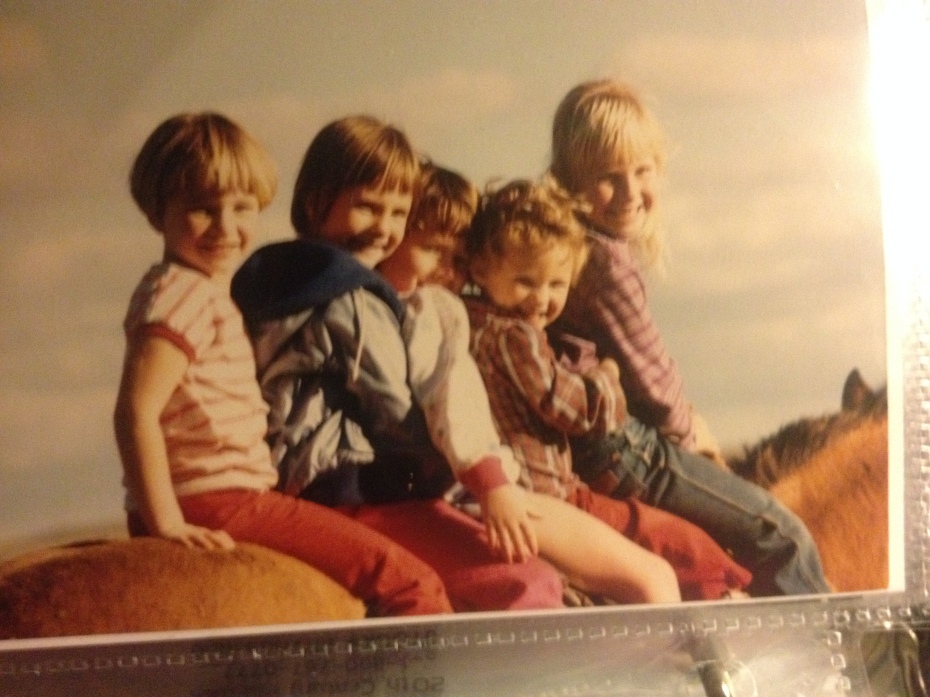 Some of the Bennett cousins in the mid 80s, from left to right, Kendel, Toni, Kellie, Jolene and Leslie.

One thought on “History”