“It’s a lot like nuts and bolts – if the rider’s nuts, the horse bolts!” Nicholas Evans

Posted on March 10, 2020 by horseshoeangusranch

Monday was a beautiful day. Toni had warned us that this was going to be a hell week for the whole week with 2 trials and 6 hearings. She had gotten coverage on most of the hearings, but both trials were going to be difficult. So Toni was in Yakima for court early on Monday. Anna checked cows before she went to school, and we are still starting out the week with no new calves or foals. Toni was in Yakima until late, so the kids did chores and then I took them home. They wanted mac and cheese with taco meat for dinner, so that is what we had.

Tuesday was another beautiful day, and still no news on any babies. John texted that we needed to be sterner with the ladies, he wants pics of babies, I said I agree. But, I don’t really know what that means, tell them sternly to have a foal?? Toni was home Tuesday night, she won her first trial, which had run over into Tuesday. She had taken mom with her, so they brought us home pastries, that were REALLY good, and probably the only people that needed them were the kids. But don’t worry, that DID NOT stop us from eating them. 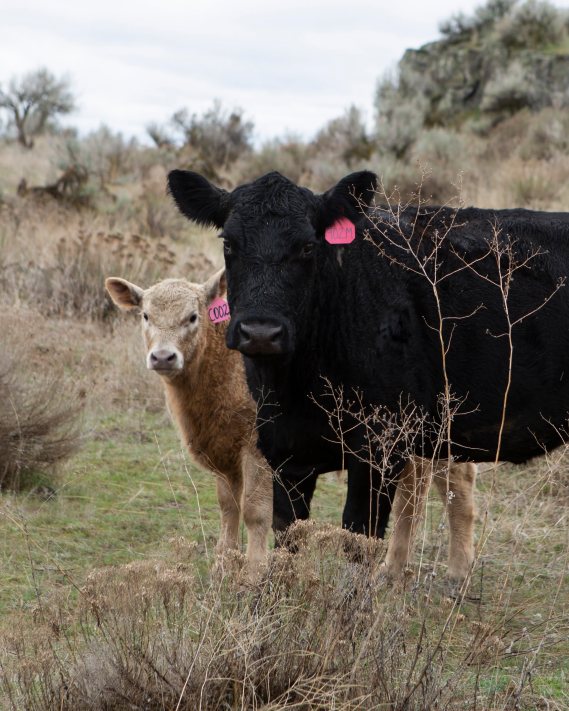 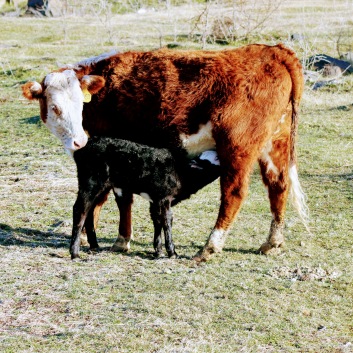 Wednesday’s post was that there were not any foals to report, so again, that results in a text from John, “you weren’t stern enough with the ladies!!! March 9th is the full moon, maybe then.” Lets hope we have something to report by then. Last year we had one on Presidents Day, we are a little behind. None of the mares want to give them up, they all just want to keep them for themselves. Toni was in Ephrata Wednesday for trial number 2. That trial did get over on Wednesday.

FINALLY on Thursday there was a baby, Ro was the first mare to foal again, and again, we had a foal on little Savannah Jean’s birthday. So what did we name our cute little filly? Miss Vanna Jean of course. Thursday was a crazy morning, on my way to work I looked down into the field like normal and see Maggie with a foal, Maggie foaled late last year and it is not bred. I see Ro standing a little ways away and determined that Maggie had stolen it. So I went down to mom and dads, got the 4 wheeler and went out and got them in. Of course Maggie did not want to give Jean up, because she is so cute, so it took me a little while to get them sorted. And of course we are rebuilding the corral, so there are spots were there is no longer a fence, a tractor is in one pen, tools everywhere, so our safe spots are fewer than normal. I put Maggie in with Jackpot so she was not out with the other mares. After the whole morning commotion, the rest of the day went great. Toni was in Richland on a couple of hearings, but got back at a decent hour. Toni and Anna got the three mares in that needed to head for the AI station on Friday. Got Mil and Stinger dewormed and ready to roll. 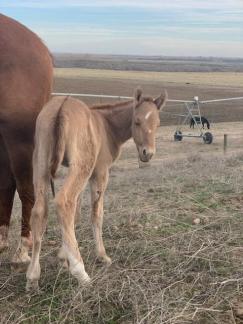 Friday was a great day, or a busy day, but no new foals. At least Kade’s heifer, Lily, calved on Friday, Kade was pretty excited, she had a heifer, so of course he wants to keep it. I got up, checked the cows, took the gooseneck down to dad and loaded Stinger, Mil and Allie’s mare in the trailer for dad to take to Allie. It turns out that Stinger is pregnant, so she is no longer getting AIed. We are going to AI Mil to NZ Scotch Time, and now Charlie to Midnight Starlight. Then I went down to Pasco to pick up some pork, went to Agri-Services to get parts for the white and then went to Broadmoor to pick up the 5th wheel, but it was not done yet. Got home in time to throw all of the meat in the freezer, and then headed into Connell to get Anna for a sports physical. She needed to get an xray, so we then headed to Othello to get an xray, the x-ray technician was out until 2:15 so we went and got coffee, bread, tomatoes and fuel. We went back, got the xray and then headed home to help Toni hold horses for Chad. Since all of the kids were home by then, so we had lots of help holding horses. I went down and moved the mares from circle 7 into circle 8, let Jackpot and his mares out onto the hill and put Ro down in Jackpots pens. Dad had dropped the mares off with Allie then headed to St. John to get a new mare for us. Dad rolled in while Chad was still trimming, so we got that new mare, which we are referring to as “Eddie” unloaded and turned out. Ben and Kicker put CIDRs in the last group of AI cows, which Toni and I were a week off and thought that was next Friday. Then Kade went home with us and spent the night and we had BLTs for dinner. And I think Toni is depriving Kade from having bacon, he ate as much bacon as he could. Kaine’s cow, Snow Queen, was calving when Ben came in, so after dinner we went back out and checked her and she had a black balie heifer. 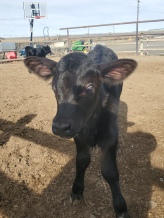 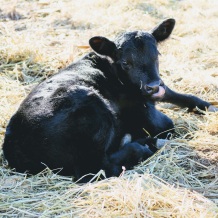 Saturday we went around and checked all of the mares and cows. Mom and dad went down to the Tri-Cities for mom to get her hair done, and brought pizza back, and we celebrated Kicker’s birthday, Happy Birthday Kicker (actually March 8). Then, Toni and Kade took one of Kade’s cow over to Kameron’s house to breed to a Charolais bull, he is planning on having a show steer out of her, we will see if it works. Anna, Kaine, Jaxsen and I started chores, because Anna was going to the father daughter dance and Toni needed to do her hair and makeup when she got back. We checked the mares on our way home, nothing new to report. While Toni was doing Anna’s hair and makeup, Kicker and I put out grass hay at mom and dads. Ben and Anna went to the dance and Kaine and I watched Pay per view, his choice to watch movies or go out to eat, he chose movies.

Sunday Dad, Toni, Kicker, Kade, Jaxsen, Ben and Kaine all went to Addy to get some Continuous Fence we bought. They had a great trip besides having one tire fall apart as they went through Spokane. They had a guy from the car behind them run up and knock on the window and let them know. Ben had taken the little generator, so it only took a few minutes to change the tire. They got to Addy and had a great breakfast with Ruth and Gary (continuous fence owners), and our friend Roy that came over the hill for breakfast. Then they went to Ruth and Gary’s to load the fence. It was efficient, but still took over 2 hours. Luckily the weather was good, the boys had room to run, and Ruth and Gary were great. Anna and I checked the cows and horses. Then we stopped and talked to mom and we all decided to go to Othello for lunch, so we ran into Checos. We got a few groceries after and then came home. Then Anna rested and I got the calved heifers in and tagged their calves and turned them out. Next, I got Anna’s Hereford cow in, since she is a half sister of the bull we are using, and locked her up. I let Gunner out on the hill with the one heifer left to calve. After that Anna and I went and did chores and then came back and fed the cattle grain and Anna fed her bottle calves, Bjorn and Duke. Then everyone was back and Kicker and Ben took over the cattle chores. 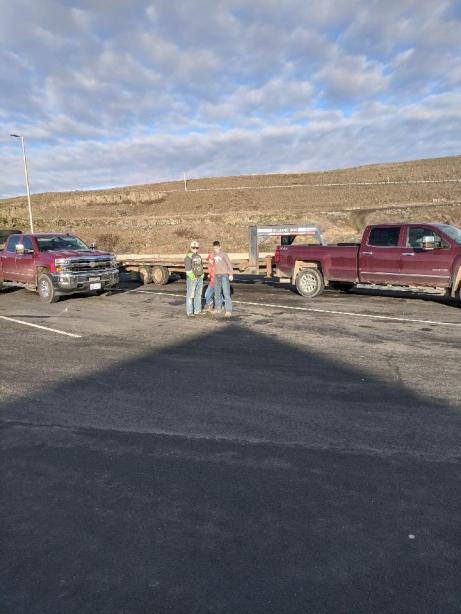 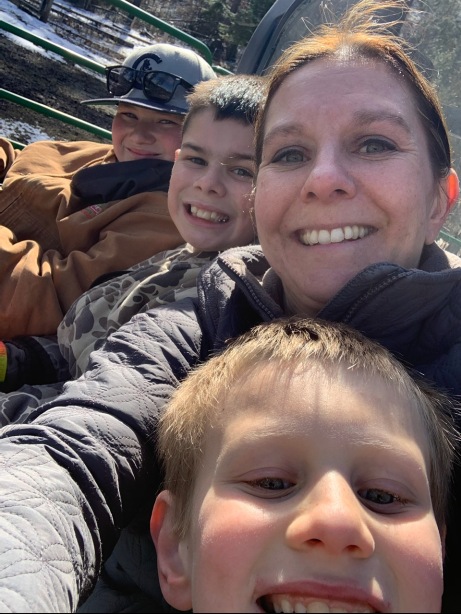 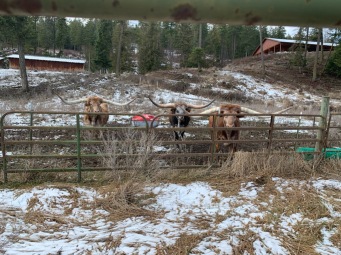 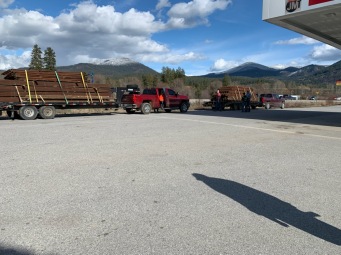 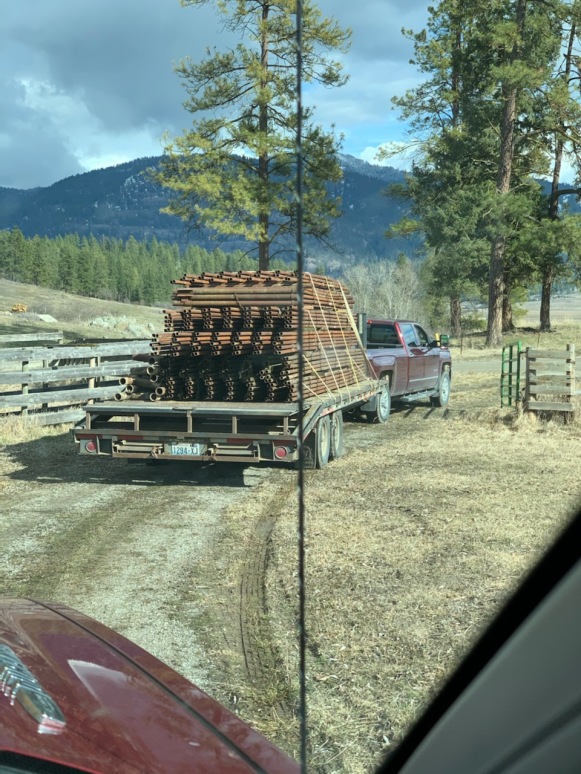 We are ready for the calving to end and the foaling to begin in earnest. Hopefully that can happen soon. With this great weather, it is time to see some foals on the ground.