” tried being reasonable, I didn’t like it.” Clint Eastwood

Posted on November 19, 2019 by horseshoeangusranch

Monday was Veterans Day, a celebration to honor America’s veterans for their patriotism, love of country, and willingness to serve and sacrifice for the common good. We would like to take a minute to thank all of the Veterans out there.

Monday morning dad took a load of beef cows to Toppenish. Anna and I fed grain and checked animals, then I took mom to her physical therapy. She is getting physical therapy on her broken wrist. After physical therapy we got lunch to take home from checos. Following lunch, Kameron came to get the bred heifers, so Anna, Kaine and I got them in and sorted out the old cows that we had left in. Next, we caught the heifers and steers and then Toni, Kade and Jaxsen got there when we were almost done. The 4 kids worked on heifers and steers and Toni and I worked on M&M, Macy’s heifer that she is getting on Sunday. M&M did really good for her first time with the show stick. Then, Toni and I went down and looked at the bull calves and checked on Leroy and Fancy. Both are doing great. The kids washed off the grass carpets for our show on Sunday, we are just having one with the 4H group at the house since the kids missed the jackpot on Nov 2nd. Toni and I went down to do chores after and worked on the three foals. Also, I worked on getting breeding information into AIMS from our spreadsheet, we are going to start calving around Dec 17th, so I had better get it before then. I also made an apt for our grass fed heifer on Nov 20th, half is sold, but if you want some grass fed we have a half left. 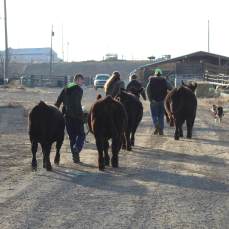 Tuesday started out as a foggy day, and worked its way into a rainy day. Toni had caught the plague from the kids, I am hoping to not catch it. Since Toni was ill, I went with dad to the Franklin County Cattlemen’s meeting. I had not been in a while. Dad and I had a good time, I sat with Mindy and Leslie and Dad sat with Alexanders. Also on Tuesday, Toni says I am no longer allowed to write about my dislike for Daylight Savings, so I have stopped writing about it. Toni and the kids still did chores even though she had the plague.

Wednesday was another dreary day. Toni was still sick, but Toni and Leslie went to the Washington Cattlemen’s meeting in Kennewick in the late afternoon. Toni did chores before she left. Joe got home with Anna’s steer from TX, they got home a little after 6 PM, so we went over and picked him up and put the little red steer in with him. He looks really good and is pretty calm considering he just made a 36 hour trip by himself. He just stands there and stares at us all like what is going on? Jaxsen was not too interested in going to see the steer, so we dropped him off and he went in to see Great Grandma. He and Great Grandma had quite the conversation, but it is a secret.

Toni was so sick with the plague on Thursday that she came back early from the WCA Conferences, and did not even make it down to the conference. Anna, Kaine and Jaxsen did chores and then I ran Jaxsen home when I got there.

Friday Toni was still sick, but she took Double Down to the Sagehill Clinic to get Coggins, Brand, and Health to go to CA next week in the Youth Development Program. She started to feel a little better as the day went on. But, still not great. Kicker went down and helped the kids with chores.

Saturday we had not booked any horses to leave since we thought the boys had a basketball game. Ben went out and worked on fences so we could turn the bulls out on stalks and the calves out on the grass. The 4 kids and I caught everything and washed the show animals. Then we worked on them and took them for a walk. Dad, mom, Skip and Jack all got to moms on Saturday. Our cousins Brandy and Jody also came over to meet Jack, so Brandy’s kids went out and saw the horses and petted Rocky the bull. Toni and Kicker put out straw on Saturday as well. 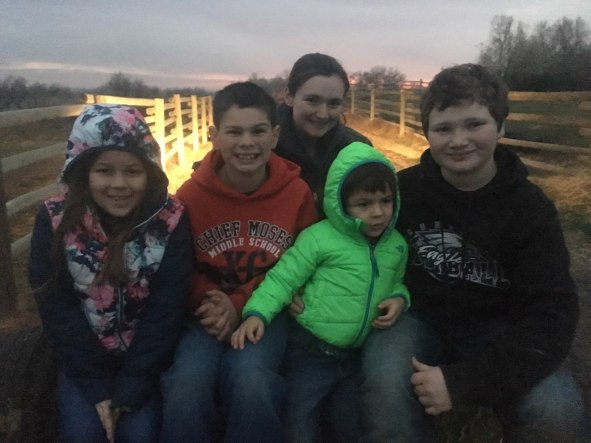 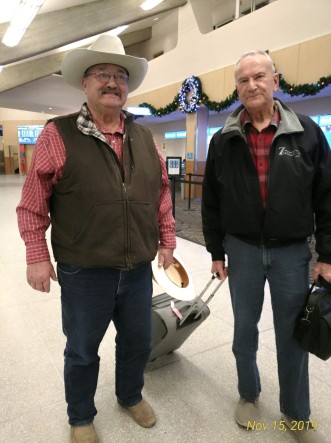 Sunday was our KT Invitational, basically we invited the members of our 4H group and a few others. The kids, Kicker and I got up and started catching the animals. Toni went down and loaded Cutter and then she came down to help. Kicker went to put his tri tip on the smoker, since we were having a birthday party that evening. Ben was up at the house making bacon wrapped shrimp. We got everyone washed and blown and then went and had lunch. Josslin and Macy came, Bella, Adrian and Emmet. Macy showed her heifer, I don’t know what her name is yet, Bella showed Kade’s steer Nigel, Adrian showed Kade’s steer Goldmember, Emmet showed Kaine’s steer Austin, Anna showed her Texas steer, Sir Freddy G, Kaine showed his Montana steer, Smithers, Kade showed his Evergreen steer, General Gogol, and Jaxsen showed the clubby heifer, Foxy. We all had a great time, Adrian won market with Goldmember and Kade got Reserve with Gogol. Anna won showmanship and Kade got Reserve. We had volunteer judge Heidi Shattuck, and she really worked a lot with the kids. Tina Kocar donated ribbons, and they were AWESOME. If you want to buy ribbons go to Ribbons by Tina. Horseshoe Angus donated mugs for the Champion and Reserve and candy bars for all. Josslin stayed and helped do chores. More pictures coming soon. 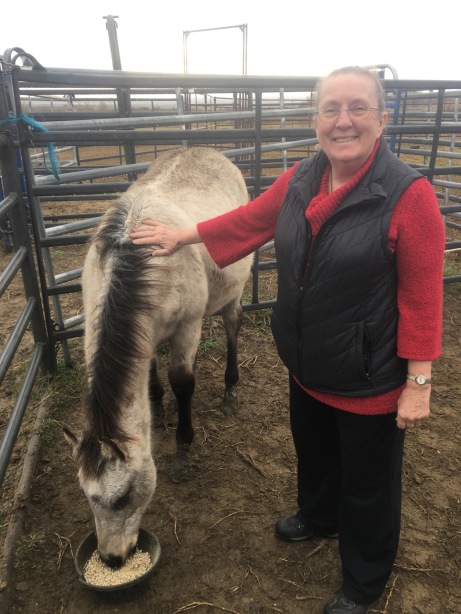 After chores we had a birthday party for Anna and Toni, Toni is turning the big 40 on the 19th. We all also got to meet dad and Skip’s brother Jack over the weekend. California cousins, Linda and Patricia flew up to meet Jack too and participate in the birthday party. Lots of food and laughter, you can’t have a better birthday party than that!