Never approach a bull from the front, a horse from the rear, or a fool from any direction.

Posted on January 22, 2019 by horseshoeangusranch

We started out the week with Toni telling me she would only be here in body, not spirit. She had six hearings in five days, three in Federal Court, so her mind was elsewhere. But she did manage to check the cows a couple of days, it helps keep her centered to get outside. Monday we had 4 calves, all Angus, Kaine had a game in Basin City at 4, dad took him to it, and Kade has practice at the Youth Ranch, so Toni took him half way to meet the coach for a ride. Anna and Toni did chores, and Jaxsen sat with dad and watched TV. Tuesday we had one Angus/Hereford calf, so Jaxsen had one calf Monday and one Tuesday and they are named Jaxsen and Jaxsen Jr, and his Hereford heifer is Jackie. No, he is not egotistical at all. Kaine had a game in Connell that dad took him too and I met them in there, and Kade had practice at the youth ranch again. Wednesday Kade and Sonny had boy scouts. Toni had to work late on briefings for her hearings on Thursday, so Dad and the kids did chores. Whim somehow managed to jump out and luckily only scratched up his chest a bit. Dad and the kids put him back and put a taller panel where we feed him. Because he is the last yearling stud colt left, we have moved him to the corral with the intention of moving the coming yearling colts into the colt pen, separating them from the fillies.

Thursday was Kaine’s last game. Also, dad took Jewels into the vet on Thursday. Toni had a job shadow start on Thursday after her hearings were over, so she was late for chores again. Kade also had bb practice so everyone was heading different directions with kids. The rain has been constant, making everything a muddy mess. Normally we have wind that keeps things dry, but not this week. Working on King has been difficult, but necessary. King is very different from what we usually raise. He is very reactive and needs consistency. We can normally be done with the halter breaking process in about a week, but King is well into his third week. He leads fine until something sets him off but he calms down quickly. This colt has amazing athletic ability. He is one of the coolest horses to watch move, with very level, quick action. This colt does not lack in the smarts department, he is just hotter than our normal foal. We had originally thought to keep him as a stallion, but time will tell if that is still in the cards. Toni and I both really appreciate the good qualities that this colt possesses, it is just a matter of if those qualities outweigh the qualities that we see as negative for our breeding program. 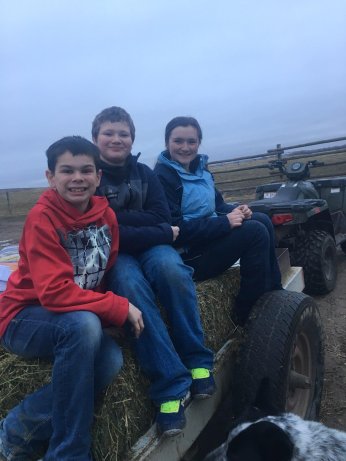 The other big excitement on Thursday was watching liveauctions.com to see our cousin Jay and his crew show at Denver with the carload that they had taken. Denver is seen as the premier Hereford bull show in the country. BB Cattle used to go to all the big shows, but had slowed down just due to logistics. Jay decided it was time to get with it and had a mostly girl crew that he took. Lots of people came to see the bulls while they were there. With a bunch of hard working, good looking ladies, and a pen full of top notch bulls, what was not to like? Jay seems happy with how the bulls did. And for Denver the weather was decent.

Friday I was home and got to check, I also took Nezzy and Popcorn to the vet to get spayed and neutered, Jewels helped me feed and I caught up on some paperwork. Then, in the afternoon I took Ivy up to Kolton and Scarlett’s house. Ivy did not like being alone so we went over and got the mini mare Foxy, who was across the road, and put her with her. Then I went down and the kids and I did chores.

Saturday Kade had two basketball games At Ki Be, they played well. Chad came out and trimmed feet, we did a bunch of mares, two studs, Bunny, and Foxy. Anna helped Ben tag calves, and according to Anna Pudding tried to get him (Pudding is one of Sonny’s cows) and Ben said she was just following him around and around the pickup. Ben also cleaned out one of the feed lot pens (cleaned mud out) so we could sort the Spokane steers off by themselves. We put Smoke in a pen by herself since Ivy is no longer with her. Smoke is now in the pen that the coming yearling colts are supposed to go into. Due to the continuous rain and lack of urgency, the colts have not been moved yet. We have talked about it. We have looked at them and talked about it again, but no actual movement yet.

Sunday we put King back over with the other foals, he gets to have a halter breaking break since it is so muddy and he is doing decent. Not much happened on Sunday. We all were kind of tired and just did chores and worked in the house. Sometimes it is nice to just take a bit of a break. By that I just mean we didn’t put in a 10 hour day, because even when you are taking a break, you still have to feed, check water, check livestock, check fences, and deal with anything there is to deal with. On Sunday night we sat around for a bit and looked at old pictures. Toni was trying to find some pictures to give a friend who has lost her father. It was really fun to show the kids some of our old pictures and reminisce, taking some time to share family history and stories.