Posted on October 17, 2019 by horseshoeangusranch

Monday started out as a beautiful October day. There was no football practice, so the kids were home to help with chores. But then, Kade got sick, Toni went and got him from school. A fire started in Mesa, and almost burnt up Connell. We are all thankful to all of the volunteer firefighters out there saving all of the houses and the town. They worked all night, and when I went to work on Tuesday I could still see flames and fire engines. Connell has such a great community, the restaurants in Connell were getting food ready to send out to the fire fighters and feeding the people that had been evacuated. We are thankful to live in such a great community. Pictures are from Emma Mauseth facebook page. Thanks for the use of your pictures Emma.

Tuesday was still such a beautiful day, but it was definitely getting colder. And starting to feel late when it is only 7:30, but so dark already. I hate it. Kaine and Kade had a football game Tuesday night in Connell. Toni and the kids did chores and then she ran Anna home to do the cattle chores. She and the three boys met me in at the school. The boys had a great game, lots of tackles, Kaine even got to pack the ball, since the other team was in a different league and there was not a weight restriction on who got to pack the ball. The wind howled and it was a really cold game, Toni and I had to switch off and on who took pictures to warm up our hands. We went to Papa Rays after the game and had dinner. 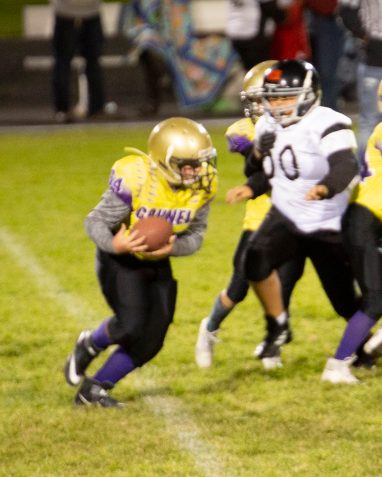 Wednesday was a sunny brisk morning. Ben was working late, and Kicker was still gone on his work meeting, so we hustled through chores to go and do the cattle chores at my house. Jac Jac and Gangsta were doing really good. Anna has taken over Jac Jac. Sonny had boy scouts so he got to miss out on chores. Toni had a couple of hearings on Wednesday but got home in plenty of time to work.

Thursday Kaine and Kade had pictures for football, so Anna and I started chores and Toni ran the boys in. I have not seen the official pictures yet, but some of the preliminary ones on Facebook have been cool. Jac Jac and Gangsta have been pretty good to work on, not as good as the last two groups, but better than expected. 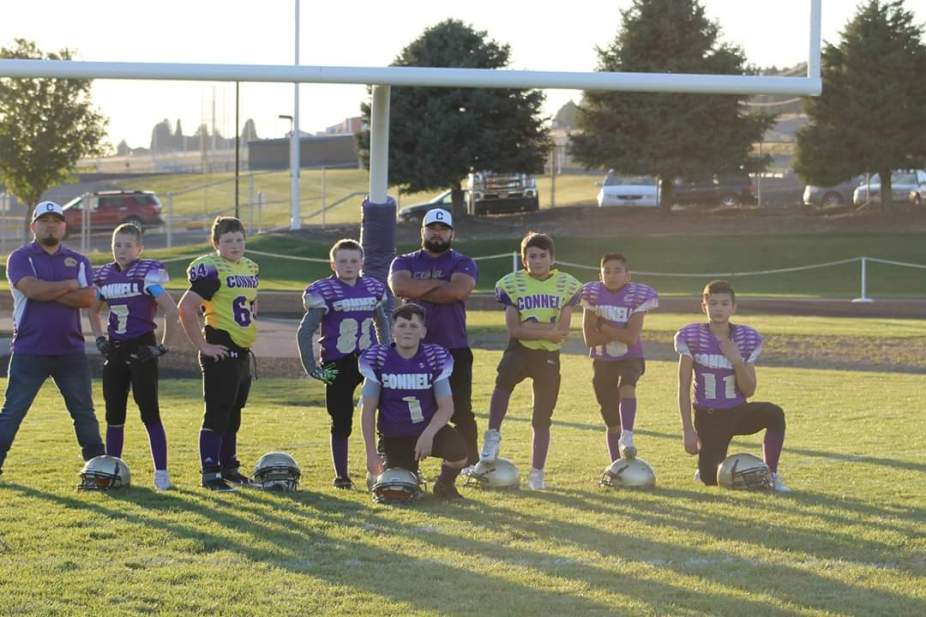 Friday Toni and I got heifers in to preg check. Dr Hank Wisse came out and Kameron came out too to help since he is looking at the ones we have for sale and he wanted to ask Dr Wisse questions. We only have a few open ones, two we did not breed, so we were hoping they were open and just double checking. They were show heifers and who knows if someone’s bull got loose at a show at night and was tied back up by morning. Not likely, but possible, but we did not want any surprises. They were summer heifers so we are just waiting to breed them in 2020. One heifer we were completely surprised she was open, she has not been in heat, so we are guessing she has something else going on. One heifer we found out was a twin to a bull, her mom calved down at the bottom of the circle and sometimes the coyotes get the calves down there. But normally they leave the carcass where you can see it. They must have drug it off, because there were no signs of a second calf. Toni rode Friday and I rode Ollie to get them in, they were the only two horses we could catch out in the 100 acre pasture, Cad and Shimmer were big NOs on getting caught. We actually could have caught Riley or Bev but neither Toni nor I wanted to ride them. Friday did awesome sorting cattle for her first time. She got right up and would push them and caught on to the sort really well. We are always really happy with Friday. 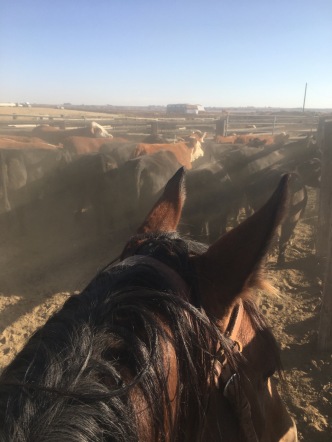 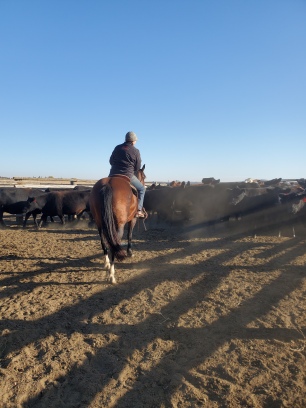 Then we had lunch, moved everything around, Toni switched to Ollie and I switched to the pickup so I could run ahead and open gates. After that Toni had to run into an assembly at school and I stayed home and wrapped some things up. Next, we started getting ready to go to Evergreen Sale and Jackpot. Kade and Kaine were both recognized at the assembly for their ROAR (Responsible, Orderly, Always Safe, and Respectful), Kade was student of the month for his class and Kaine was recognized for his playground demeanor. 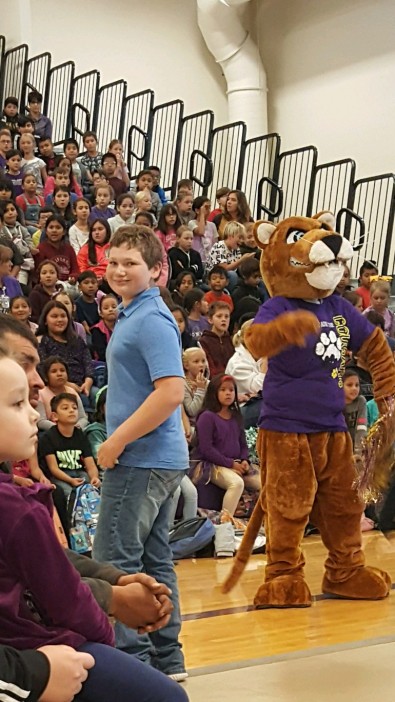 Saturday morning we headed to the Evergreen sale in Moses Lake. We got there early so the kids could participate in the knowledge bowl. They had a lot of fun and it was a new experience. The kids picked out a few heifers they wanted to bid on, and Kade picked out a few steers. At the awards presentation before the sale, Anna had the third place high point heifer, so she won a little money from showing Dillion. We ended up buying three heifers and one steer. We helped Gayle Sukdorf and Steve Jachetta pack their stuff out, and then Gayle helped us set ours up. We put our new animals and the four steers we in the tie outs and then headed to dinner. We had a great dinner at Incas. 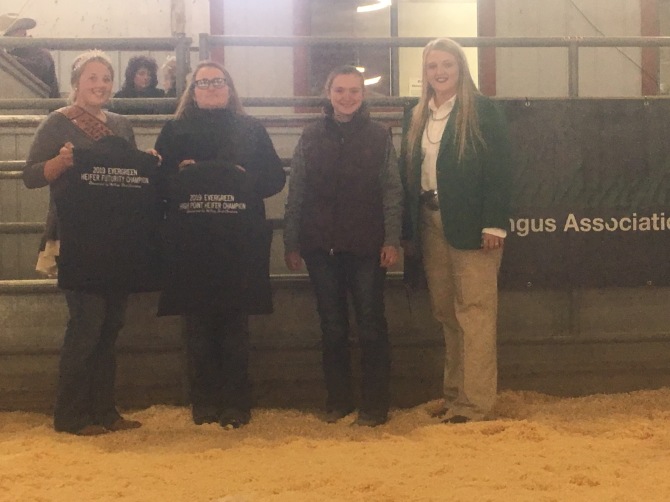 Sunday we got up and washed the heifers and steers for the Evergreen Jackpot. It was dark so it was hard to see how clean we got them on the wash rack, but the water was warm. Our clubby steers we raised did really great. They all acted like they had been to a show before.

We started out the show with the heifers we bought, Anna’s is a May heifer, and she was the only one, so in a class with Aprils. The heifer showed great. Kaine and Kade’s heifers are both Marchs, and Kaine was third in his class. Anna and Kade didn’t fare quite as well, but these heifers are new to them and need to be in “show shape” (obesely fat) to compete against the heifers that are already being hauled around. Then we showed our two Dakota Gold steers in AOB. Anna’s was Reserve Champion and Kade’s was second in his class. Both steers did great. Kaine showed Austin and Kade showed Gogol in cross bred steers. Both steers showed wonderfully. Ben, Kicker, Sonny, mom and dad all showed up to watch the kids. As well as Steve and Juanita Jachetta and Allison and Austin Porterfield. So they had a lot of help and a huge cheering squad. 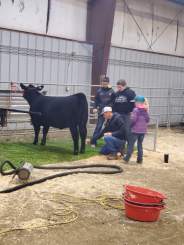 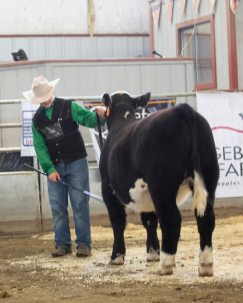 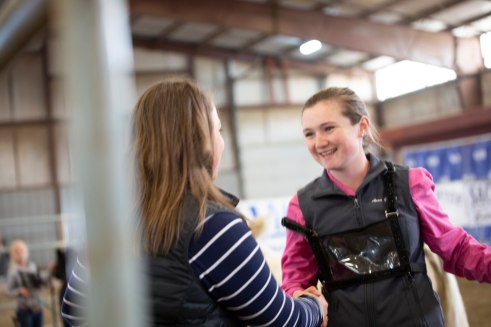 After we got back from the show, the kids washed their heifers and steers while Toni, Sonny and I cleaned out the camper. Ben and Kicker headed to get some hay. Next, Anna, Toni, Kade and I went down to mom and dads and haltered Baretta, Lily and Snip. They all did fine. We are hopeful that Anna can take one over so we each have one to work on this coming week. We also got our 4th cutting of hay up and got the bull calves turned out down in the alfalfa field. We are still waiting on the corn to be harvested so we can get the cows out on corn stalks. Harvest is still underway so we are a touch understaffed, but we are making do.