The calm before the storm, fair is around the corner 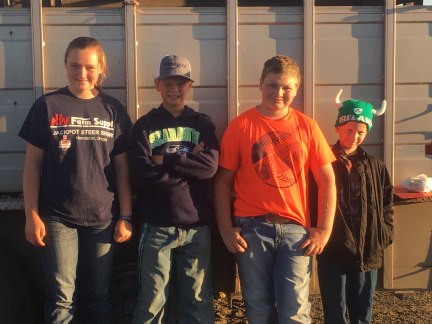 Monday dad ran me down to the substation first thing, for work, I went to a meeting at Grand Coulee Dam, so I just jumped in with someone to carpool. Then, dad hauled a load of cows into Toppenish. The kids worked on their heifers and steers. The weather was really nice on Monday, not too hot or stormy. We got to tour the Dam while we were up there for the meeting and it was pretty cool, we went down and toured where they are doing all of the upgrades on the coils and pumps. Dad picked me back up at the substation and then we went back home to do chores. The twins and Marlo came by to say good bye to us all, Marlo is headed back to Kansas State and the twins to Oklahoma State on Wednesday morning.

Tuesday morning Toni had meetings, then she had Brita and Austin out to see their filly, and they went ahead and looked at a bunch of the horses. Austin also took a picture with Rocky, since Rocky is a REAL bull, not some wimpy bull. Brita and Austin seem to be pretty happy with their filly. Mom and dad headed to Spokane for a Travis Tritt/Charlie Daniels concert, which means we are in charge of their crazy animals. Mom- “Well, you have to take the dog out on a leash and let him really find the right spot, and you can’t leave him out there. And the cat, you really need to watch the cat, she needs to come in at night, but she doesn’t like anything new.” Yeah, OK mom, maybe your animals are a bit spoiled. Truthfully the dog liked being outside with us and we didn’t leave him out all night, so all was good. The kids worked on steers and heifers and cleaned out the camper, for the fair that is next week. The kids started clipping on Tuesday as well.

Wednesday Toni had court most of the day in Yakima. Mom and dad were coming back from Spokane, so Kicker stayed home with the kids in the AM and got them started with their steers. Mom and dad got home around 9 and went and got Jaxsen from Kicker and Kicker headed to work. Coco brought Senator Mona Das out to see the kids and their steer projects. Farm Bureau does “Farmer for a Day” were senators come out and ride around with a farmer to learn more about agriculture. Coco also took Senator Das to Lovejoy Farms were the twins, Marlo and Diane showed her their farm and their lavender production, strawberries, etc. The kids finished clipping all of the steers, both Connell and Benton Franklin steers. They just have the three heifers left to do. We also got our first load of grass straw for the winter on Wednesday.

Thursday Toni and mom took the kids back to school shopping, they tied the steers and heifers in the barn before they left. After they got back Toni took them down to work on their steers before Grace picked them up for their 4-H meeting. Tennelle wanted to know why Toni and I got to keep missing it, I told her because we have you guys. Then Les brought them back, we met her on Hendricks Rd. Missing the 4-H meeting is the best. The kids do a great job on the meeting, but we really have other items we need to be spending time on. We also got our second load of grass straw on Thursday. By the time I got home, Toni had the chores done and was saddling the second 2 year old, just because they need saddled.

Friday Toni and the kids took the trailer over to Connell and got all of the tack loaded. After work Ben and Leslie took the campers down to the Benton Franklin fair and got them lined up so we can park them on Saturday. I met them over at the fairgrounds after I got off of work to pick them up.

Saturday we went down to the Benton Franklin Fair to set up for the fair, we haul in Monday. After we set up in the barn, Leslie and I went over and waited by the campers to park them, which was the fastest it has even been! Toni and the kids headed home to do chores. Toni took them by Burger Ranch for shakes on their way home, and I met them there because for once, the camper was set-up and done. Toni also tried to buy some show heifers at the Express Sale online, but I put the hammer down on her and spending too much money. Our good friend Leonard was sitting next to her egging her on, he said, “Toni, don’t let a couple hundred dollars stand between you and happiness.” Yeah, shut up Leonard, no one needs to encourage her. Because we got home so early, for once, Toni and I then went and hauled calves out of Circle 5 that Ben and Kicker had sorted back to the house, and then went and got all of Leroy’s pen in, sorted them, and hauled all the mares and foals back to Mom’s. We left Fancy and an outside mare in with Leroy. We finished chores then went and checked Sagebug’s pen. Sagebug has 1 foal, 3 outside mares, and 1 of our mares left with him. He is such a pretty guy.

Sunday Ben the kids and I went down and got groceries to take over to the camper and make sure everything was working. Darryl came out to look at Woody, Darryl has Lona’s three year old colt, “C.” When Toni was out showing Darryl the foals, she noticed that Gunner had somehow gotten in with our “not to be bred or already bred, don’t put a stud out” pen. Luckily, Gunner didn’t get hurt, didn’t rip the fence down, and was easy to get in. Toni got him in, Kade and Toni fixed the fence, then Toni hauled him back to my house. So Gunner is our first stud officially pulled out of the mares. He will be at my house for the winter. I had to run the boys in to get their football gear on Sunday and luckily their coach is very understanding because I was running late. Other than that, we just got ready for our big week and did chores. 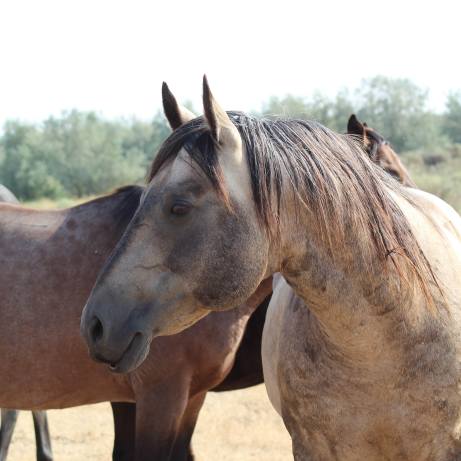 We are getting ready to head into the Fair. The Fair’s theme, as always, is the “Best Week of Summer.” We could probably argue that it is not the best week of summer, but the kids always have a great time. If anyone needs any beef, we will have three fantastic steers going through the auction at Benton Franklin. Come see us at the Fair!