Posted on November 26, 2019 by horseshoeangusranch

Monday and the start of a new week and it was Anna’s 14th birthday. On her next birthday she can get her driver’s permit I hear, NO, I am not ready, but really, whoever is? Toni went down early to show Patricia “her” foal, Nellie. On her way she saw a cow was out and got her in. Also, we planned to send a mare out on Monday, so Toni got her in, and one of the outside mares, but neither ended up going anywhere. Toni had her Dr apt Monday as well, to see what had been ailing her. Turns out she has to have her gall bladder taken out, she is a chronic colicker. The kids and Coco did chores, Coco was here for a day. Then we had a birthday for Anna at my house with tuna casserole, left over bacon wrapped shrimp and salmon, left over hotdogs and German dogs for Kaine and Kade, salad and pumpkin pie. 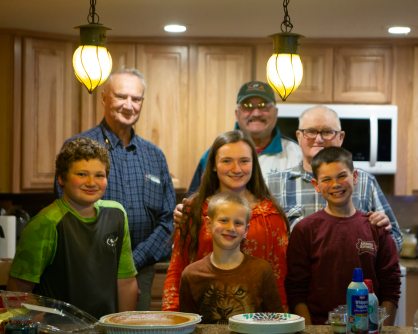 Tuesday was Toni’s 40th Birthday, a big day. She took Kade to the Dr and then Kicker met them in town and they went to Chinese for lunch and got Desserts by Kelly for dessert. Then she got to do chores with the kids and the kids and I made her tacos for dinner. Kendel made her an awesome cake that told her she was old, but Toni reminded Kendel that she is not far behind.

Wednesday was a beautiful day, above average temps, the sun is shining. Dad took our grass fed heifer into McCarys to get butchered, we still have a half left if anyone needs some grass fed beef. We had a couple come from Seattle and decide to take Posie home. They were a great fit all the way around. Posie hadn’t been trailered before, but everyone took their time and she loaded calmly, but slowly. Tennelle picked up Anna and Kaine from school to get their hair cut, they were looking pretty scraggily Leslie went and picked them up after school so they could see grandma. We stopped at mom and dads on our way home so they could approve. Toni, Kade and Jaxsen did chores and lead the foals. Doc Hollywood is the pen favorite. He is a typical Leroy foal, so born halter broke and friendly.

Thursday was another sunny beautiful day with above average temperatures. The foals that are in are dong awesome. Toni and the kids have been doing a great job on them.
We woke up to fog and cold on Friday, but not terrible. Toni and Kicker went to Spokane to celebrate Toni’s birthday for the weekend and go to a restaurant she had wanted to go to. Double Down left to his new home, and it has been reported back from his hauler that he made it to his destination safely.

It was foggy and cold again on Saturday, the kids, Ben and I worked the calves. The four kids were all great help. At ten Darryl came and got Doc Hollywood, he loaded great and left to his new home in Yakima. Then, after we worked all of the calves the three older kids decided they needed to work on steers. So they caught their three clubby steers by the house and took them for a walk. They also had them tied in the barn all day. Dad and the three boys ran into Connell and got us pizza for dinner from the pizza station, it was great.

Sunday was a beautiful sunny day. Alvina was coming out to look at show steers, so we got the calves in again and she picked her steer out. Then we went down to trim horses, Chad trimmed the riding horses first, so the kids rode them back up to the house bareback and Alvina rode Friday. Toni texted she was home and had caught horses for Chad to trim at mom and dads. So Katie and I dropped Chad off down there with Toni and then Katie and I went back so Katie could get their truck and Alvina then they headed down there. The kids and I ate lunch.

The three older kids and Ben worked the steers and Jaxsen and I went and opened some gates up for the horses to go into different pastures. Then we went and looked at some more steers and then went and got the other kids to look. Kaine bought one more clubby steer and Kade has to try to convince his dad he needs another one. Toni was half done with chores when I got done there. So we got some pictures and a video of Lala and Whim. Then haltered Ruthless and Peanut. Overall a very productive weekend.