The kids are officially on Summer vacation and loving it.

Posted on June 25, 2019 by horseshoeangusranch

Monday Toni had court in Ritzville early so Kicker went down and helped the kids tie up the steers and heifers. We are getting ready to head to Prineville on Thursday. Toni and I worked on the corral fence for a while after chores, not too long because we had the wrong drill for what we were trying to do. Kicker and Ben brought some straw down to put in a circle track were dad’s circle keeps getting stuck. And Debbie, over where the minis are at, called to say Jesse had foaled. She had a cute pinto miniature baby. 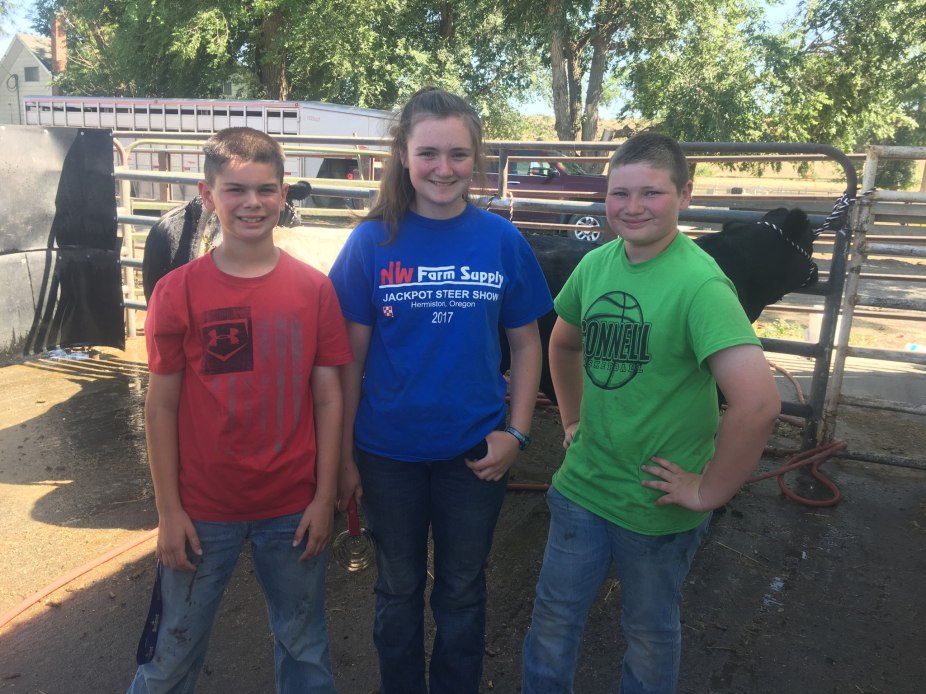 Tuesday Toni took grandpa to the Dr, so she took the kids over to Connell to help Leslie and pack up for Prineville. Anna and Kaine tied up the steers and heifers in the barn before they left. Kaine worked on the twins’ heifers to see if he could show one of them in showmanship in Prineville. When we called they said he could still show in showmanship, but it had to be a heifer entered in the show, we could not take his other heifer. Toni was able to coordinate lunch with Grandpa, Grandma, mom, dad, Tom and Peggy and make a plan for the wedding on Wed for Cousin John and his bride Cindy, who is a perfect fit for our family. When the kids got home the three oldest worked on their heifers and steers and Jaxsen needed to “rest” so he went home to watch Netflix. After chores Toni and I continued on our corral rebuild and put up a gate. 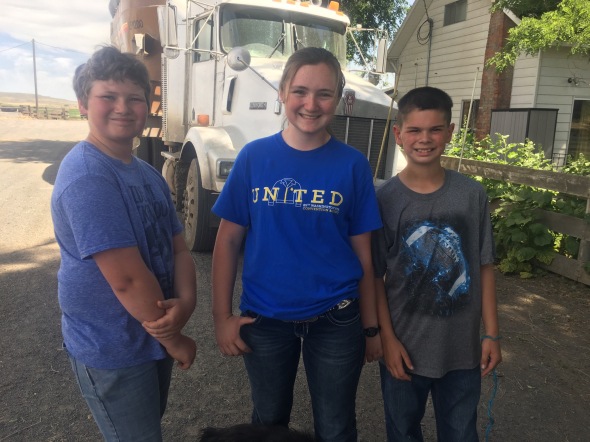 Wednesday Anna and Kaine continued to pack up drinks, tack, feed and snacks to leave Thursday morning EARLY. Toni had court so Kade did not get to go down. Wednesday afternoon Toni got to perform her second wedding, her goal is three. Kade and Kaine were the ring bearers and Uncle Tom was the self-proclaimed best man. It was a surprise wedding in a way. The bride and groom just planned on it being Toni, them, and 2 witnesses, but John is a favorite cousin so everyone wanted to be there. Peggy brought flowers for the bride and cupcakes for everyone. John and Cindy were so thankful that the event was made special and the family support that they have. Everyone had a great time. What could be better? A wedding with minimal stress, but still cupcakes. 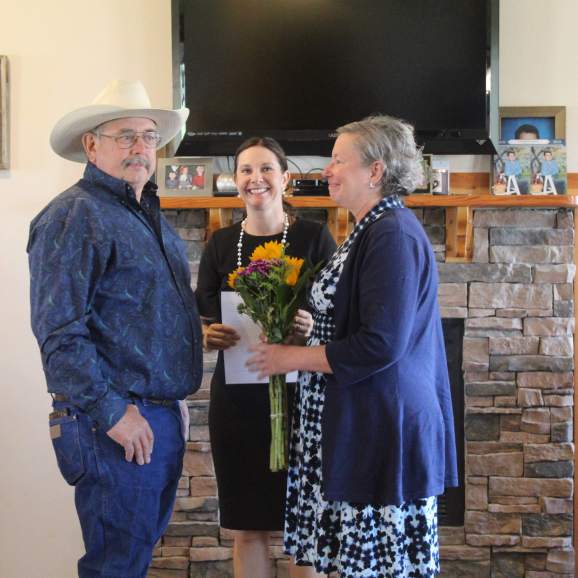 Thursday we left at 4:30 headed to Connell, then Eltopia, then Prineville. I told Leslie the drive was not that bad, but I guess that was because I did not drive, she did. LOL. We got to Prineville around lunch time and got the heifers unloaded and washed, bed set up and then we had sandwiches. McCall, McKenna and Kade participated in the team fitting contest and had a great time. Back at home, Toni was getting colts ready to ship to CA on Sunday. 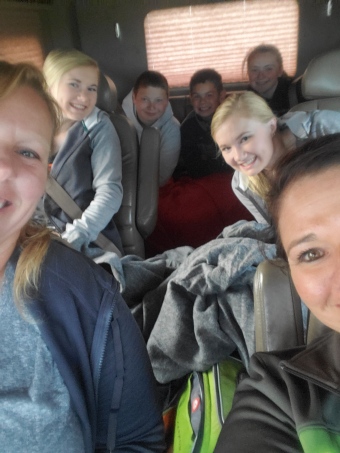 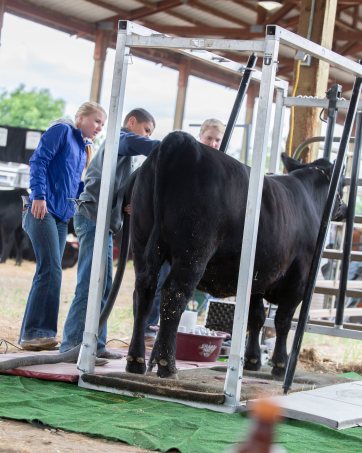 Showmanship started at 4:30, the twins were in the first class as super seniors, McCall was grand and McKenna reserve. Kaine was excited because he was showing McCall’s heifer, the “better” heifer as he says. Anna and Kaine were after the intermediates, Kaine was called back to the championship round, Kade was in the next class. All of the kids showed great. Then we had ice breakers and pizza with the green coats from the Angus Association and we went back to the hotel to swim in the pool.

We were up again early on Friday to go wash the heifers. Breeding classes started at 9. Kade was in our first class, he was Bred and Owned Reserve Champion Junior Heifer. Anna was in our next class and she was Reserve Champion Owned Junior Heifer. The twins showed great, they were in a big class and were 3rd and 4th. Kaine did not have a heifer to show, so he only got to show in showmanship. So then we packed up and headed home. We made good time and were back by 7:30 ish, after we dropped the twins off in Eltopia, Leslie in Connell, switched from the Mini Pete to Butte.

Toni sold an additional colt to CA so had to run him, Justify, into Sagehill vet for paperwork. Whim had still not recovered all the way from getting gelded and had an abscess on his neck, so he went to the vet too. I am sure Sheena at Sagehill loves it when we text her and ask if she can just please pretty please, fit us in? But she does fit us in, so she must love us. Justify did an awesome job and is such a good colt, and Whim is awesome too. Whim ended up staying at the vet. Justify came home.

Saturday John H. was out to get his Frisian mare Lucy and bring out a new mini mare, “Misty.” Then the kids and I went over to see Debbie and her grandkids and the new mini colt, Birchstrum. Toni gave John, Jacquie and Ann (Jacquie and Ann got there after John) out to visit the foals and took the tour. The kids and I got back and we worked on heifers and steers and put a feed bunk in the calf pen. We also got the colts in and moved them up to my house from mom and dads to load them out at 1 am. All three, Pecos, Cole, and Justify are Colonel foals. With Cole and Justify leaving, we are down to just the 2 yearling colts for sale and the foals.

We were up around midnight to load Cole, Justify and Pecos and send them to CA and get Friday back. Abdul did not make it until around 12:45. They all loaded like champs and Abdul took off and headed back south. Then, when we woke up again, we did some work around the house and worked on heifers and steers in the afternoon. Kade went shooting with Kicker, so Jaxsen worked on Kade’s steer, and was not happy about it. We tied the calves up for the first time and Jaxsen’s were the best. Dad called as they were pulling out of the driveway to tell us that Blackie foaled, so we all ran down there and saw our beautiful new filly, Stormy, a black filly that Anna is going to keep. We also took updated pictures of the two yearlings we have left for sale, King and Louie. 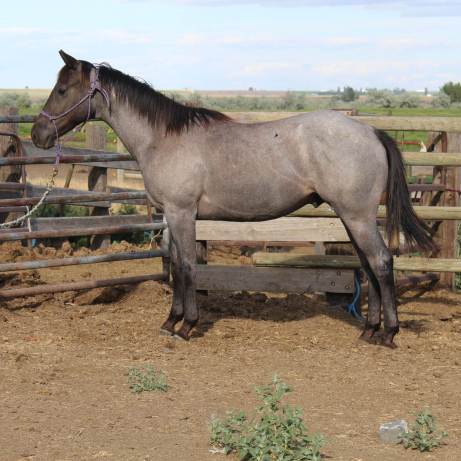 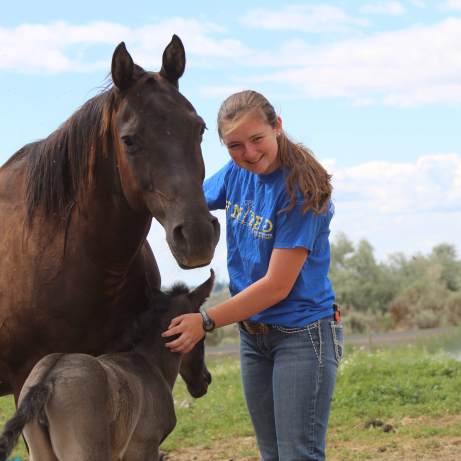 We are now down to 5 mares to foal. We would like to see those foals in 2019. We are nearing the end of June, and staring at July. We are still getting outside mares in to breed, but we are nearing the end of our breeding season. The show pen is now at 23 head with the calves, so the kids have lots to keep them busy over the summer! 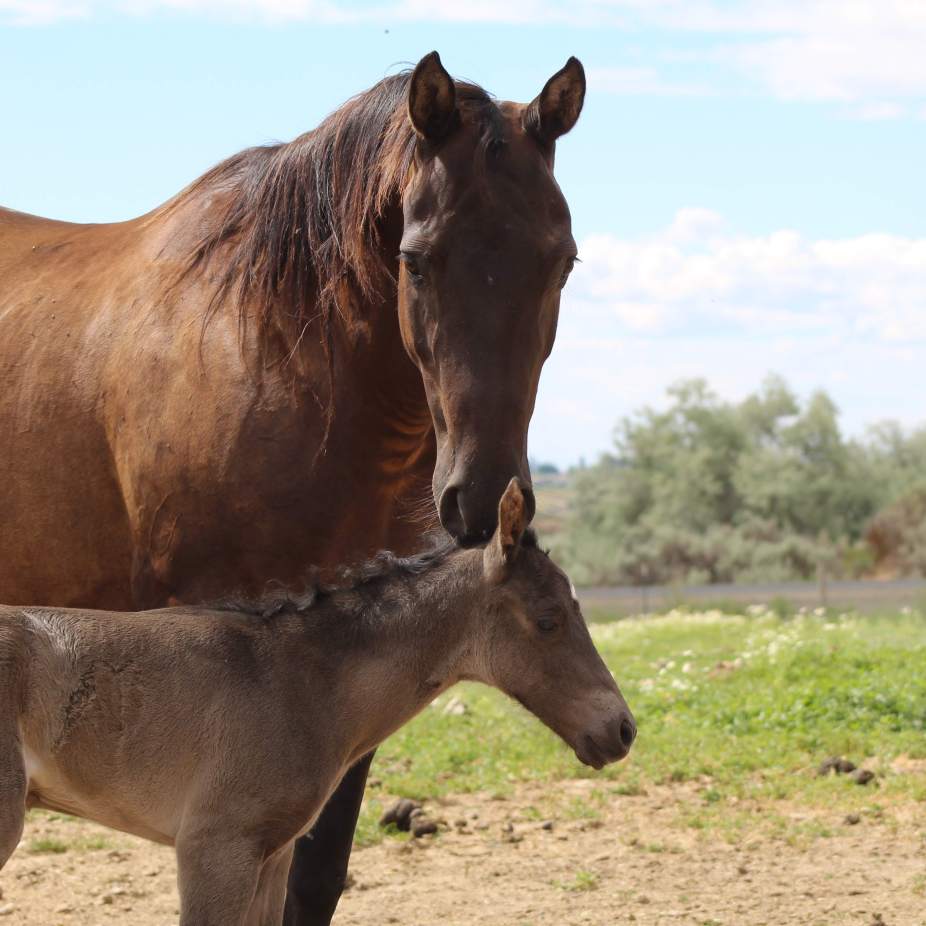