Posted on February 25, 2019 by horseshoeangusranch

Back when we were growing up, Dad would put us, and whoever else was helping, in the pick-up, along with the dog on the pick-up floor, and out we would go to check and feed cows. There were times when there were 3 or 4 kids, a hired man, a dog, and Dad all crammed onto the bench seat of that Ford pick-up. The good news for our kids is that all of our pick-ups have a back seat, so now we just cram the 4 kids on the back seat, and the adults in the front. It keeps life entertaining. We all get sick of hearing about dinosaurs and dragons, but Sonny will outgrow this faze at some point, so I guess we get to enjoy it while it lasts. Monday was President’s day, so the kids had no school and I had no work. While Anna and I were checking we saw that Ro had foaled. We did a Facebook poll to name the cute guy since it was Presidents Day and KT Cant Trump This won. Besides the foal we had a pretty normal day at home, feeding, watering, checking, deicing. I am definitely ready for winter to end. But it looks like more snow is in the forecast for next week. 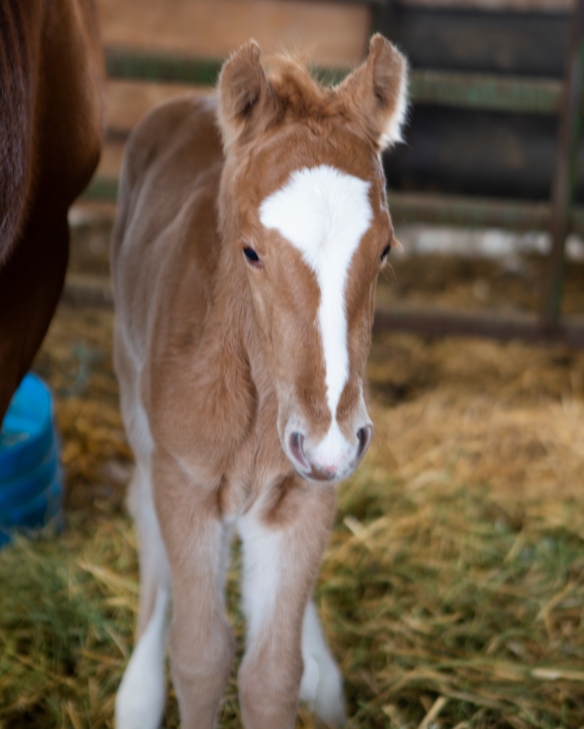 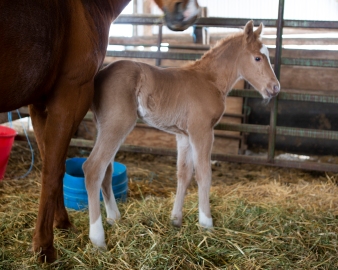 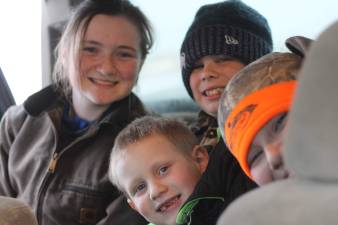 Tuesday the kids FINALLY had school, the roads were actually clear. Anna texted on her and Kaine’s way to the bus that 0041B had calved, we have the heavy cows next to the driveway since we don’t have that many of them right now, and that way they have lots of straw. 0041B had a cute bull calf by Eric, our 10Y son. Toni checked that morning and that was all that was going on. However, by the time Toni went and fed the horses that afternoon Lola had foaled. She had a cute bay colt by Bishop. Ben and Kicker went out with the trailer to help her get them up to the barn. I hear it was a fun time with all of the mares trying to steal the new colt. Luckily Lola was great to deal with and they got her walked out to a farm road so she could be loaded and taken to the house. Ro was not happy about sharing the barn, even though they are each in their own stall. Dad and the kids finished up chores and then when I got home I took them to my house so we could all see Snip (new colt).

Compared to Monday and Tuesday, Wednesday was pretty uneventful. Kade and Jaxsen had boy scouts, it was their friend Aram’s birthday, who was also at boy scouts, so dad went and got the three boys and then dropped Jaxsen off and picked up Kaine, and took the three to Aram’s house for a birthday party. I went and picked them up after I got home from work. Toni checked the cows and nothing was going on. Ben had pesticide class Tuesday and Wednesday, so he was home late and him and Kicker got started feeding late, since Ben had the pickup Kicker could not start without him. The only event on Wednesday was that Tiny Tim the tiny calf in the barn somehow got out of the barn and Toni couldn’t find him. Luckily she finally found him under the grain mixing box and packed him back to his mother. Tiny Tim is out of Poison, one of Kaine’s show heifers. He is a cute, perfect, little tiny bull. Everyone just dotes on him and he is very tame, which is why Toni just picked him up and packed him back to the cow. The barn is full right now with Tiny Tim, Snip, and Trump, with their mothers, all taking up spots.

Thursday we had two calves when Toni went and checked, nothing was happening then, but 4016 and 402T calved later in the day. They were both in the heavy pen in the straw. No new foals, but we are keeping a close watch on the mares. Shady got moved back to the barn and is in with the heavy cows. She is not loving that spot, so we are going to have to move her when the weather is a bit better.

Friday Anna got to go with FFA horse judging in Finley, she was pretty excited to go. She wore Toni’s FFA jacket, I guess soon we will have to get her one of her own. Her friends Daisy and Kelten were also going for CDE, also 7th graders. Dad took Daisy and Anna into school, since they had to be there early before the bus would have gotten them there. 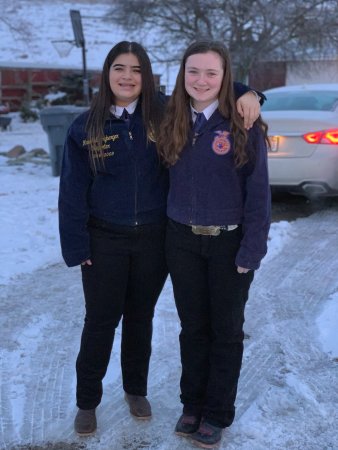 Cattlemen’s was Saturday, we always have a great time with our cousins and friends. Also on Saturday we fed the horses and cows, checked the cows to see if we needed to get any more in the heavy pen. And did normal Saturday things.

We woke up Sunday to MORE SNOW. I am starting to feel like it is never going to go away. We made it home from Cattlemen’s, dad, Kaine and Kade had done chores and checked the cows. The horses in the desert were down hiding in the trees, so we had to fight our way through new snow drifts to get down and feed them.

Now we are at the start of a new week and it looks like it is supposed to snow AGAIN, ALL WEEK. But we are staying positive, at least we don’t live in North Dakota! This could be worse.